Words of the Wise

“As a man who has devoted his whole life to the most clear-headed science, to the study of matter, I can tell you as the result of my research about atoms this much: There is no matter as such! All matter originates and exists only by virtue of a force which brings the particles of an atom to vibration and holds this most minute solar system of the atom together…We must assume behind this force the existence of a conscious and intelligent mind. This mind is the matrix of all matter.”

Max Planck - as he accepted his Nobel Prize for his study of the atom.


"That I am at one with the great being that made me and that formed the galaxies and the universes, etcetera, how did that get taken out of religion? It was not hard."


"When you eliminate the concept of separation from your thoughts and your behaviour, you begin to feel your connection to everything and everyone. You’ll begin having a sense of belonging, which enables you to scoff at any thought of being separate. This feeling of connectedness originates with and helps you process all of your interactions from the point of view of equality. By recognising others as co-creators, you match up with your Source and move into a state of grace. If you’re seeing yourself as either inferior or superior, you’ve disconnected from the power of intention. Your desires will be frustrated unless you connect with and support other people."

Wayne Dyer, The Power of Intention (Change the way you look at things and the things you look at will change.)


“You live in illusions
and the appearance of things.
There is a Reality,
you are that Reality.
When you recognise this
you will realise that you are no thing
and being no thing, you are everything.” 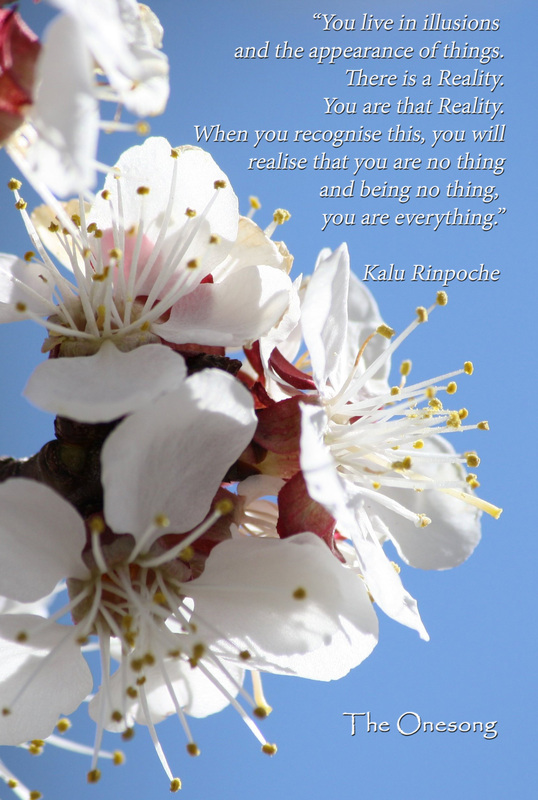 "Nothing else but your own mind that creates your world.  Your world is the product of your self."

"The ten thousand things and I are one.
We are already one –
What else is there to say?"

"Prologue : ......Whoever finds the interpretation of these sayings will not experience death.
2. Jesus said, "Let him who seeks continue seeking until he finds. When he finds, he will become troubled. When he becomes troubled, he will be astonished, and he will rule over the All."
72. A man said to him, "Tell my brothers to divide my father's possessions with me." He said to him, "O man, who has made me a divider?" He turned to his disciples and said to them, "I am not a divider, am I?"
77. Jesus said, "It is I who am the light which is above them all. It is I who am the All. From me did the All come forth, and unto me did the All extend. Split a piece of wood, and I am there. Lift up a stone, and you will find me there."
91. They said to him, "Tell us who you are, so that we may believe in you." He said to them, "You read the face of the sky and of the earth, but you have not recognised the one who is before you and do not know how to read this moment."
113. His disciples said to him, "When will the kingdom come?" "It will not come by waiting for it. It will not be a matter of saying 'Here it is' or 'There it is'. Rather the kingdom of the Father is spreading out upon the earth and men do not see it."

The Gospel of Thomas

"Whether you are going or staying or sitting or lying down, the whole world is your own self.
Suddenly one day everything is empty like space which has no inside or outside, no bottom or top, and you are aware of the one principle pervading all the ten thousand things. You know then that your heart is so vast that it can never be measured. “Heaven and Earth and I of one root; the thousand things and I are one body.” These words are of burning import and absolutely true.
When you come to grasp it, you find it was ever before your eyes."

Daikaku, From Zen and the Ways by Trevor Leggett

"All that man has here externally in multiplicity is intrinsically One. Here all blades of grass, wood and stone, all things are One. This is the deepest depth…"


"All creatures are the same life, the same essence, the same power, the same one and nothing less."


"The Art of Peace is medicine for a sick world. There is evil and disorder in the world because people have forgotten that all things emanate from one source. Return to that source and leave behind all self-centred thoughts, petty desires and anger. Those who are possessed by nothing possess everything."

Morihei Ueshiba (founder of Aikido), The Art of Peace

“Then it was as if I suddenly saw the secret beauty of their hearts, the depths where neither sin nor desire can reach, the person that each one is in God’s eyes. If only they could see themselves as they really are. If only we could see each other that way there would be no reason for war, for hatred, for cruelty…we would fall down and worship each other.”

"A human being is part of a whole, called by us the Universe, a part limited in time and space. He experiences himself, his thoughts and feelings, as something separated from the rest - a kind of optical delusion of his consciousness. This delusion is a kind of prison for us, restricting us to our personal desires and to affection for a few persons nearest us. Our task must be to free ourselves from this prison by widening our circles of compassion to embrace all living creatures and the whole of nature in its beauty."

Eckhart Tolle, The Power of Now


"Life is a visible state among the invisible."


"As a million sparks rise from a single fire, separate and come together again as they fall back into it:
As from a heap of dust grains are blown upwards, fill the air and then drop back onto the heap:
As drops of water come from a single stream and return to it:
So inanimate and live creation emerges from God’s form, and since they arise from him they will return again."


"Every sub-atomic interaction consists of the annihilation of the original particles and the creation of new subatomic particles. The subatomic world is a continual dance of creation and annihilation, of mass changing into energy and energy changing into mass. Transient forms sparkle in and out of existence, creating a never-ending, forever newly created reality."


"Continually emerging, it returns again and again to nothingness
Things arise but I contemplate their return. Things flourish and grow and then return to their Source. To return to the Source is to know perfect peace. I call this a return to life.
If you are like the Tao, you will have eternal life, and you needn’t be afraid of dying."

Lao Tzu, in The Little Book of the Tao Te Ching by John R. Mabry 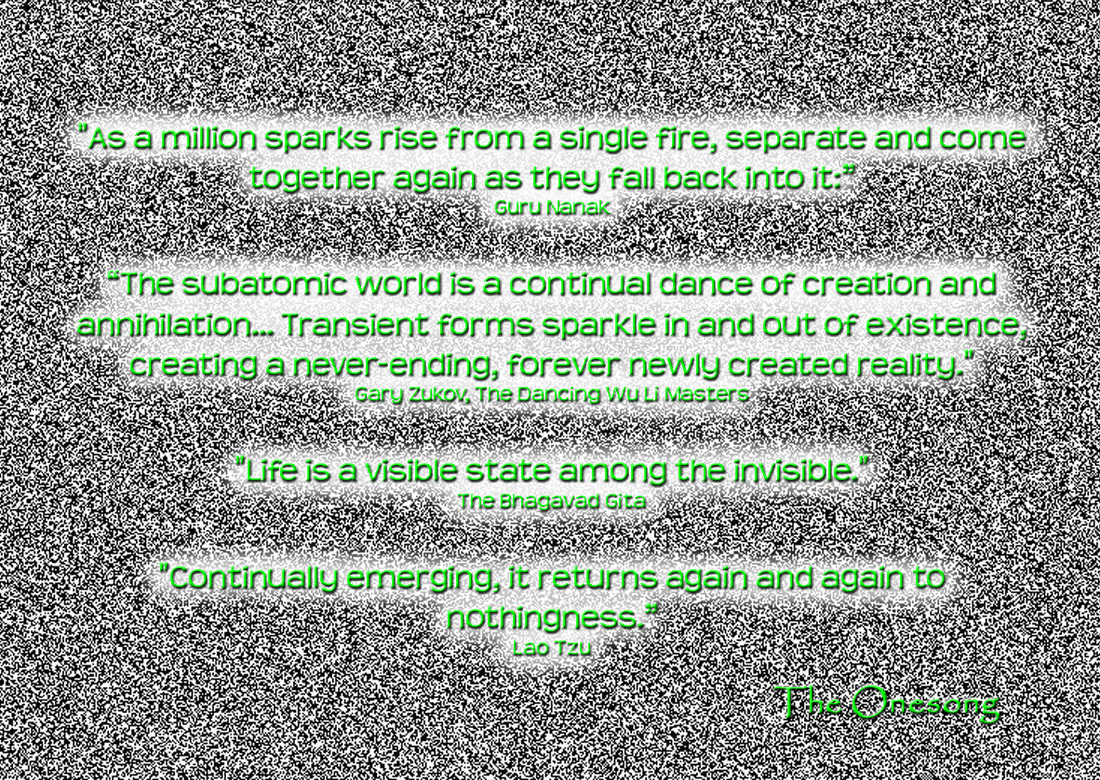 "The reason why our thinking ego is met nowhere within our scientific world picture (is) because it is itself that world picture. It is identical with the whole and therefore cannot be contained in it as a part of it.
…the overall number of minds is just one......The world extended in space and time is but our representation . Experience does not give us the slightest clue of its being anything besides that."

Erwin Schroedinger, The Oneness of Mind 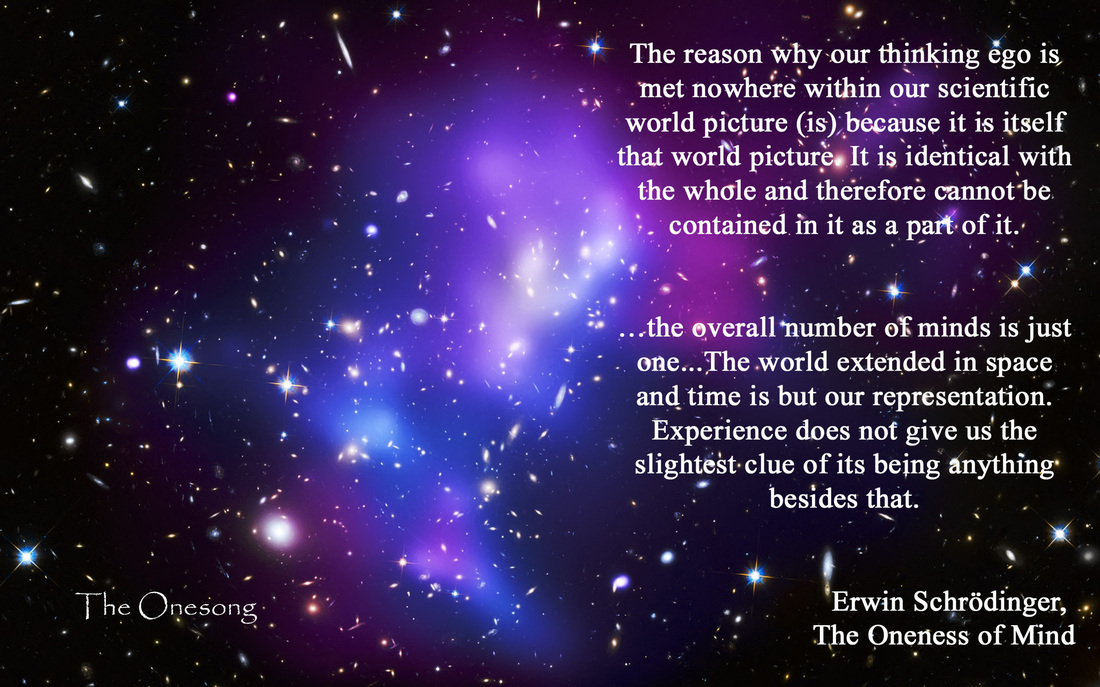