Each person is like a ray of the same sun, always looking outwards, seeing only its neighbouring rays, which appear to be separate from itself.

Each one imagines itself to be a separate body, confined by its skin and containing a specific set of feelings, memories, thoughts, opinions and beliefs which it cherishes as its own identity and will go to almost any lengths to protect.  From such a limited viewpoint, it can interact with its surrounding rays or shun them, it can desire to be with them or it can hate, envy, ridicule and seek to harm them.  It may even imagine that it's true inner self is a frightened child which needs to be nurtured and supported by other rays.

Were it to look back once in a while, it would be stunned by its own magnificence.  It would see that all the rays arise continually from the same source and that no thing and no one is separate from that source, nor has it ever been separate, nor will it ever be separate.  There is only the One.  Individuals may overlook it, avoid looking at it, refuse to believe it - just as a wave may choose not to believe in the ocean upon the surface of which it forms and subsides - but believing it is there is not required; the rays may argue among themselves if that is their choice. Meanwhile the sun simply continues to shine. 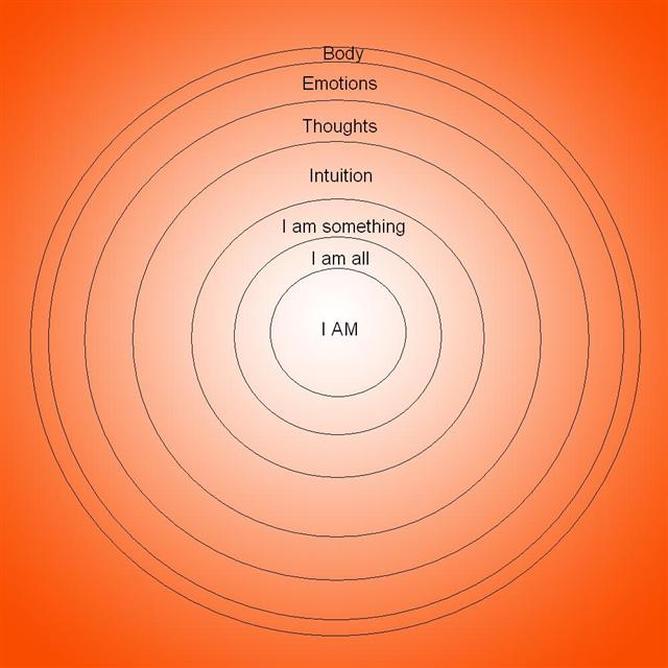 The word "sin" is an archery term which means "missing the mark".  Look at the target above.  In the outer circles, the passionate rays (the little ego-selves) under the illusion that they are separate and different from their neighbours, are the source of all sin. At the centre of the "target" there is only the "I AM" - the Self of all.  The way back to the centre is by at-one-ment; by re-membering.

Meditation is the means by which the outer layers of mind are tamed and settled so that we can remember what we are and simply be it. Once we know this, from our own direct experience, we are forever free to step back to the centre at any time and as we go about this life in the world at the leading edge of the sunlight, our interactions with our fellow rays are based only on love.